Inside the fast-growing industry of esports

From major celebrity investments to worldwide reach, there are few emerging industries quite like esports. Come and find out what it's all about.

As technology continues to boom, more and more doors are being opened for new industries to form.

We’re here to tell you about one of the industries we work in - esports - and why you should be as excited for its future as we are.

To put it plainly, esports is the industry surrounding competitive video gaming.

That’s to say, esports is the ecosystem surrounding professional gamers competing against each other, often in front of large crowds and with hundreds of thousands of people watching online, competing for prize pools stretching into the millions.

Not that we’re at all biased, but it’s a truly brilliant phenomenon that highlights how just about everyone is a gamer these days.

Multiple game titles are played professionally and they all require a different set of skills, similar to how different sports demand different things from the athlete. Professional teams exist - the largest often competing in multiple different games - and function much the same as traditional sports teams in terms of how they generate revenue and operate as a business.

Why is esports a growing industry?

When thinking about an emerging industry, what comes to mind is likely lightning fast growth in terms of popularity, an increase in revenue and investment, as well as the industry being embraced by the mainstream.

When looking at audience size, games and esports analytics company Newzoo released data in February 2019 revealing that the esports audience is expected to grow by 15% between 2018 and the end of 2019, from 395 million to 454 million. 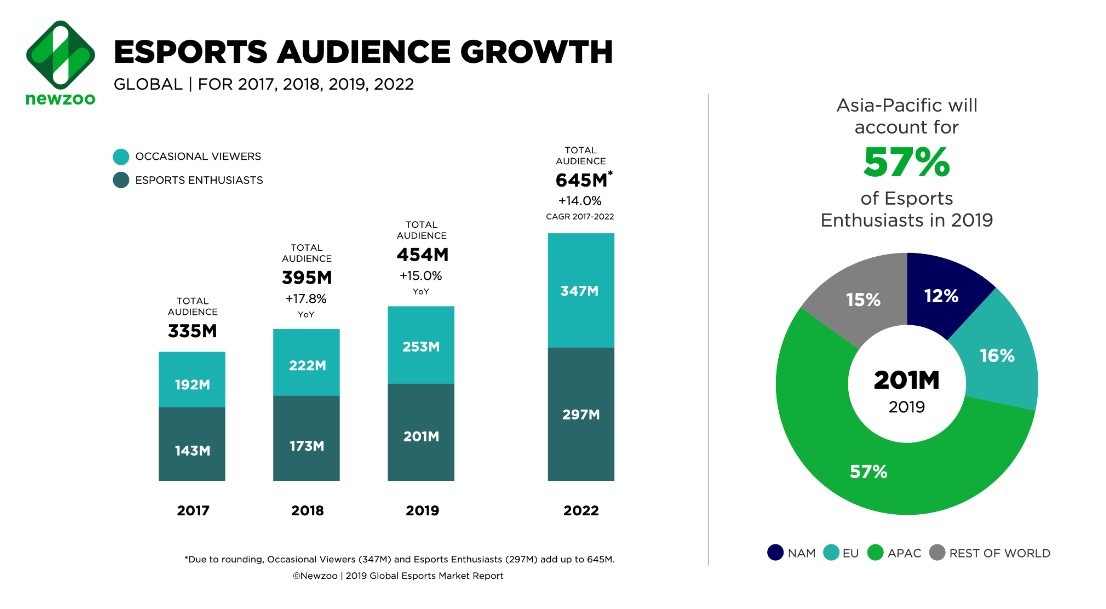 Revenu, is on the way up, too. In the same report Newzoo estimates that 2019 will see the industry creating $1.1 billion in revenue, a year-on-year growth of 26.7%, and the first time the $1b mark has been surpassed.

Lastly, esports transforming from a niche industry to one that is widely accepted in the mainstream is a process that is happening at this very moment. From Michael Jordan and Drake investing in esports teams to mega-popular streamer Tyler “Ninja” Blevins hitting the front cover of ESPN Magazine, there are signs everywhere of esports’ growing acceptance.

What does this mean for esports?

With all of this extra attention and money coming into the scene, it can be difficult to make sense of exactly how esports is changing under the surface.

However, as an esports & gaming industry jobs website that isn’t limited to a specific game, genre or device, we feel like we get a pretty solid top-down view of the entire ecosystem, and in our eyes, the simple answer is that all of these extra dollars and eyes means a heck of a lot more jobs!

In 2019 we posted jobs with companies like Mountain Dew, TikTok, Coca-Cola and Ford, who are all looking for people familiar with esports to help their marketing and partnership efforts in the space.

When combined with an ongoing increase in jobs from endemic entities such as game publishers, funded startups and professional teams, you won’t be surprised to hear that we’re posting more and more jobs than ever before.

This graph will show you just how many more we’re posting; it’s a comparison of April 2018 and April 2019, and the difference is quite staggering. 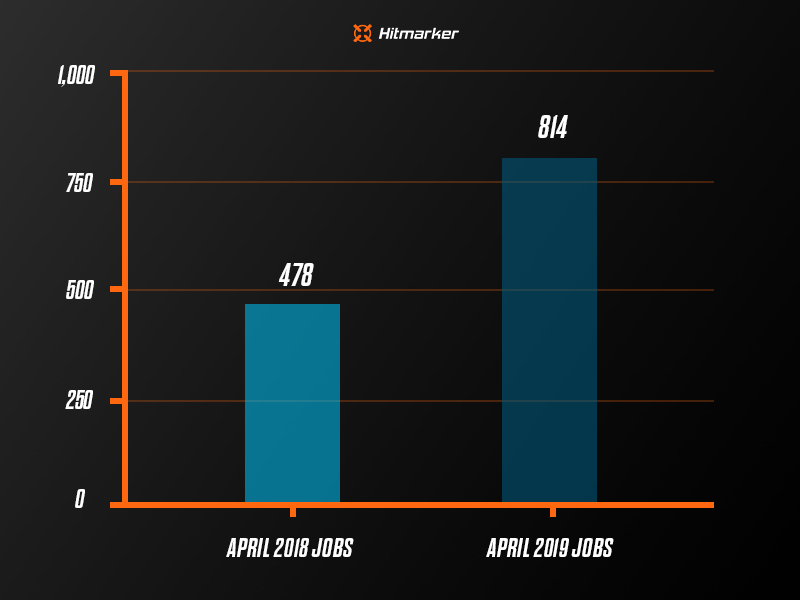 The jobs market is one way to see how fast esports is emerging, but it’s not the only one.

New industry-centric products are created each month. Our partners at the University of California, Irvine, for example, now have a remote Esports Management Course that is taught by industry experts and can be taken from anywhere in the world.

Add this to esports-centric energy drinks, clothing companies, content shows and fan apps and you have an industry that keeps on building out from its core product of professional gamer versus professional gamer.

How can I get involved?

As the largest jobs website in the industry we get asked this question a lot!

With no clear route into esports through education or work placements like you might find in more traditional spaces, it can be tough to know how to take that first step.

And without sounding too glaringly obvious, if you’re an experienced professional from another industry, then it really can be as simple as applying to the jobs on our site, or getting yourself to esports events and meeting like-minded people. Non-endemic experience, and non-endemic approaches to the problems that esports has to overcome to grow even further, can be crucial to companies tackling these issues.

However, if you are applying to jobs and come from outside the scene, just remember to sell your passion and love for esports wherever possible on your resume and cover letter (without going overboard, of course!)

If you’re approaching the industry without existing experience, then giving this guide article a read should help you get underway.

It’s also wise to get yourself on Twitter and LinkedIn, as the former still serves as the primary method of communication for people within the space. Although it’s something we’re trying to change, it’s not uncommon to find jobs posted on Twitter itself!

As esports is still in its early stages, some people take it upon themselves to volunteer for organizations around the scene to build up experience. You’ll be able to find these types of positions on our website, and they can give some people the boost in knowledge and skills they need to move on and find paid positions in the industry.

If this has all sounded picture perfect to you, we’d suggest you get started by checking out our jobs list to see if there’s anything that appeals to you.

It’s an exciting time to be involved in esports, with month-on-month growth still occurring across multiple metrics. We know that we’re very happy to be involved, and hope we can offer you a way in as well. You haven’t missed the boat yet, so why not hop on board?